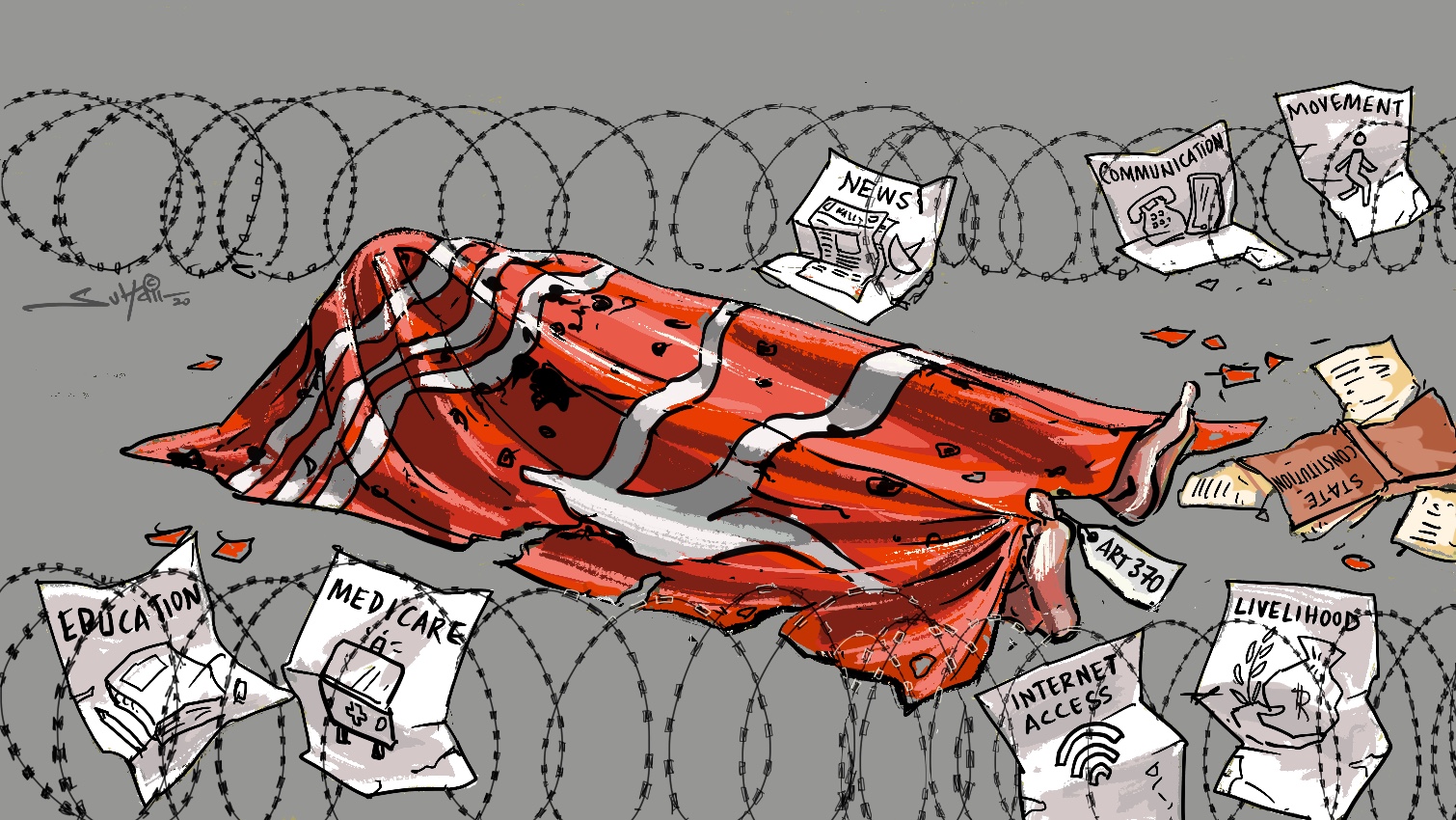 Issue 4: Kashmir: Silence Is Not An Option

In this season of global confinement and mass suffering, of protests and historical reckonings, we focus our attention on Kashmir, where the word lockdown has long been tethered to collective struggle.

On August 5, 2019, Indian-occupied Kashmir was stripped of its last vestiges of autonomy and plunged into a months-long military siege and communications blackout. What followed has been a steady effort on the part of the Indian government to undermine Kashmiri sovereignty and silence dissent. But, as Mohd Tahir Ganie writes, “silence is not an option,” and in this issue, published a year after the siege, we examine the many facets of this enduring will to speak.

Kashmir has been a disputed territory between Indian and Pakistan since 1947, but the region’s struggle for self-determination goes back centuries. The range of pieces in this issue, guest-edited by Kashmiri writers Ather Zia, Mirza Waheed, and Mohamad Junaid, closely examine the escalation of India’s military crackdown over the last year, and the latest turns in Kashmir’s independence movement. But they also take a longer view, considering how cycles of violence, occupation, and resistance mark and animate the Kashmiri psyche. Many of the pieces are from writers inside Kashmir, providing first-hand accounts and reportage from a place that is largely sealed off—where communicating across distance is a precarious luxury.

Reading through the issue, you may notice how many of the same historical moments and pieces of legislation—Article 370 in particular, which had enshrined some degree of Kashmiri autonomy, and which was gutted last year—are highlighted, explained, and contextualized. This repetition across the issue is intentional. It reflects how such political pivots reside in the collective consciousness of, as Nitasha Kaul writes, “a people torn by dates, deeds, deaths.” And, more practically, it allows each piece to stand alone as it circulates.

Complementing the essays, interviews, and poems in this issue is original artwork by political cartoonist Suhail Naqshbandi, and images by photojournalist Masrat Zahra. We’ve also assembled a playlist of songs chosen by our contributors, which offer another way into Kashmir’s “assembly of pain,” as Faiz Ahmed Faiz laments.

Additionally, Mohamad Junaid’s historical timeline is a reference point for the key political shifts that undergird the Kashmiri struggle for self-determination, from the 16th century to the present, tracing, as Uzma Falak writes, “the razor-wired passage of time.”

In Surviving the Occupation, Syed Tajamul Imran and Mohd Tahir Ganie narrate the lived experience of violence in Kashmir, where “every death is felt as a shared loss.”

Uzma Falak’s poem, the smallest unit of time in Kashmir is a siege, presents a “chronicle of days and nights as prison cells.”

Hilal Mir, in A War Against Words, considers the systematic repression of the press in Kashmir, and the ways in which both conformity and defiance come with a very high cost.

In My Pictures Should Speak, photojournalist Masrat Zahra reflects on the everyday reverberations of violence in Indian-occupied Kashmir, and her own efforts to resist repression.

Nawal, in Be it Bullets, Be it Pellets, We March Along, highlights the stories of women at the crux of resistance movements in Kashmir, today and through history.

In Ather Zia’s poem, a day in a life that inches prayer by prayer, “essential reading in Kashmir / are the epitaphs.”

Mirza Waheed’s short story, Resistance, imagines the entanglements between two people on opposite sides of the occupation.

Nitasha Kaul’s poems, The Stones of Kashmir and Kashmir: A Country of Many Names And Numbers, contemplate “A people torn by dates, deeds, deaths.”

Mohamad Junaid, in The Geopolitics of the Oppressed, maps the occupation in Kashmir, via Google Earth and in daily life.