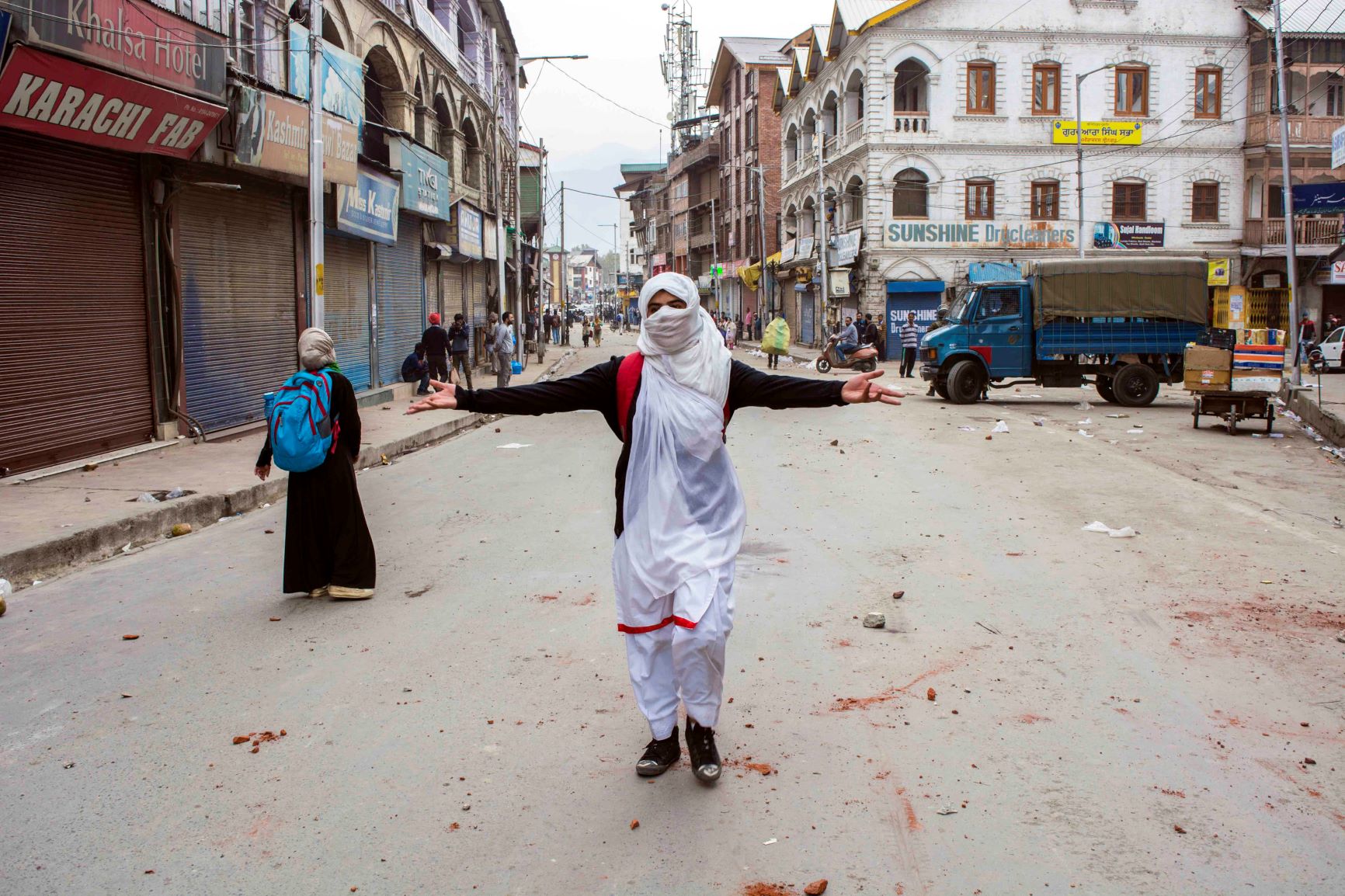 Masrat Zahra is a photojournalist in Srinagar, where she focuses on the everyday reverberations of violence in Indian-controlled Kashmir, as well as mobilization and resistance in the face of occupation. Working in an environment hostile to truth-telling, Zahra confronts intersecting obstacles, from street harassment because of her gender to state-driven efforts to intimidate her into silence. In April 2020, she was booked under the Unlawful Activities (Prevention) Act by the Jammu and Kashmir Police for some of her Facebook posts, which were deemed “anti-national;” the case against her remains open. Previously, she has been labelled a police informer. Still, she’s determined to convey the realities of life in Kashmir, to chronicle the unfolding story of her community. “I’m part of the same story,” she says. “It’s my story, too.”

The case against me has really affected my work; I find it hard to concentrate. I’m very concerned about what I share on social media. There’s always a sense of insecurity. I ask myself, will the state question the story? My pictures? The subjects of the story?

The authorities can do anything with me. They can arrest me at any time, put me behind bars. In front of them, I’m nothing. The media is not respected at all. I get nightmares about this. When I see police roaming around, I’m paranoid that they’re talking about me, that they might ask for my identity, that they might arrest me. This is the stress I’m going through. I’m also stressed about repeating everything that has happened to me to various organizations and reporters, all the time. I joined this field to tell the story of others. Now I’ve become a story.

I have been harrassed so many times, by the police, and by boys who roam around, who see a female photographer with a camera hanging around her neck. They make comments. The police might say that I don’t have permission to be there, or ask me to put my camera away. At a checkpoint, someone might follow me, ask me what I’m doing, demand to see what I have captured, tell me to delete my footage. It’s a constant struggle.

Kashmir is a conflict zone, but these photos of people looking out the window capture what a lot of Kashmiris feel. They want to be part of protests, and they want to speak about what they’re facing. But at the same time, they’re concerned for their families. Who will take care of their families if something happens to them? There’s a tension between inside and outside.

I work on intimate stories, and the everyday moments of the occupation. A man with a bag of flour, walking through a crowd of soldiers. An old woman with a look of aggression on her face. There are a lot of stories that are untold, unheard.

Whoever looks at my pictures, I want them to feel connected with that moment. I want an illiterate person who cannot read a caption to be able to connect with my pictures. My pictures should speak, to everyone.

This photo of a crowd of protestors holding up an empty bed is very close to my heart. It was taken at the funeral of rebel commander Zakir Musa. After I heard he had been trapped in an encounter, I knew it was going to be a big thing. I left my house on my scooter in the middle of the night—if you don’t move out early from your home, the police will stop you. I went with some other journalists to the house where the rebel commander was killed. We reached as it was raining; there was a sea of mud. I was the only female photographer there. Everybody was like, “what are you doing here, this is not your job, go home.” I stayed.

When these funerals take place, the body is kept on a metal hospital bed on a stage so everyone can have a last glimpse. Women are not allowed on that stage. I managed to climb onto the roof of a school building to get a high-angle shot.

After the body was taken away, the crowd raised the bed off the ground. To me, the image of the empty bed captures not only the fact that we have lost someone, but the loss everywhere, the emptiness everywhere.

Despite the difficulties of this work, I will continue. Nothing has stopped me yet. My family didn’t support me. There was a time when the people of my homeland said, “oh she’s an informer, she’s giving information about the rebels to the army.” That didn’t stop me. There was a time when the journalist community said, “oh, you’re not an accredited journalist, we can’t help you.” Then this recent episode, when the state booked me under the Unlawful Activities (Prevention) Act, labeled me a terrorist.

Nothing has stopped me, and nothing will stop me. I will always be a storyteller; I will always tell stories of my people. Because I’m part of the same story. It’s my story, too.

Masrat Zahra is a freelance Kashmiri photojournalist. She focuses on stories about local communities and women. Zahra won the 2020 Anja Niedringhaus Courage in Photojournalism award from the International Women’s Media Foundation.