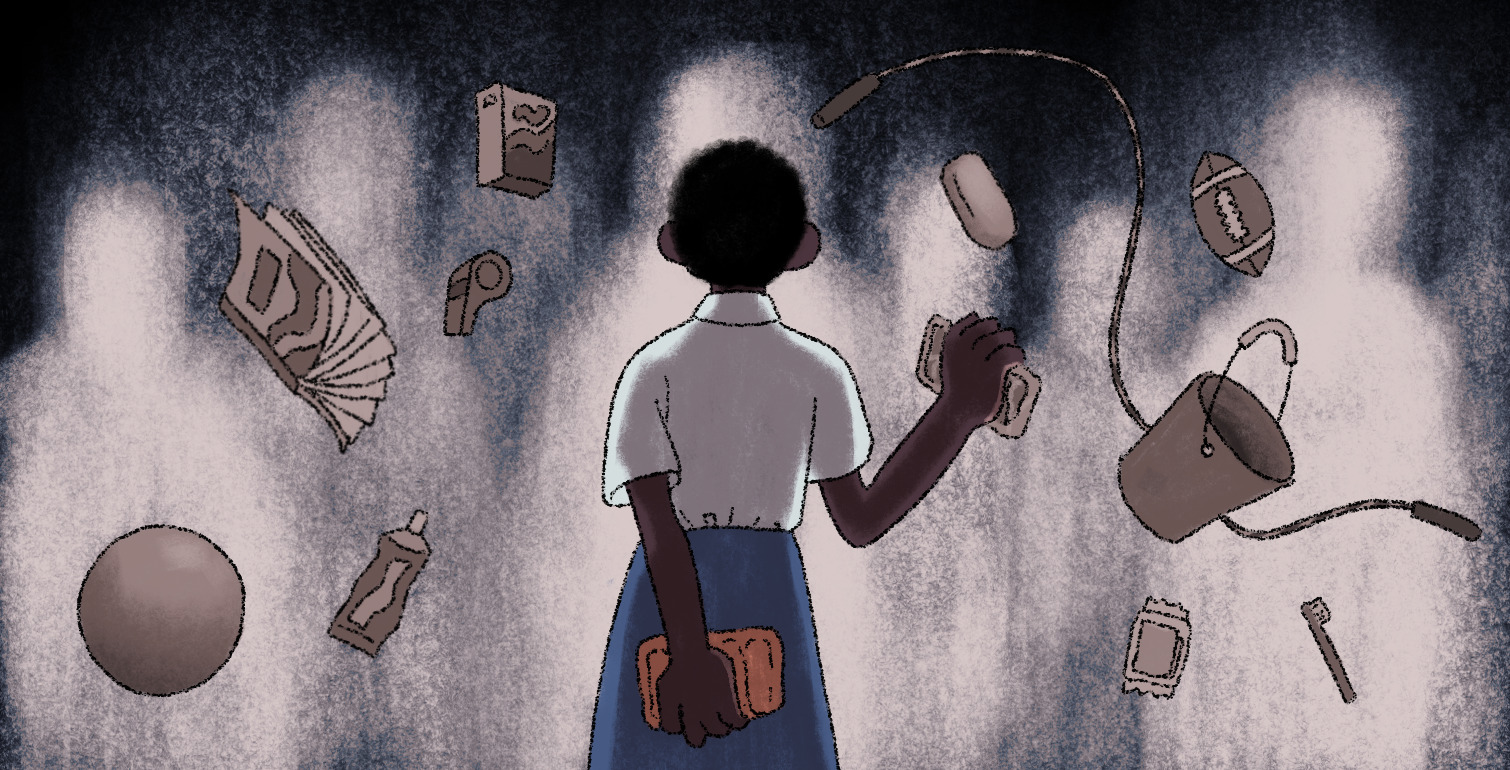 Some visitors arrived with new buckets, powder detergents, and bar soap. They did the laundry, relieving residents of weekend tasks. They cleaned common areas and donated water tanks to promote good hygiene. Others made lunch, cooking on site or arriving with caterers who prepared chapatis or chips. They washed the dishes after sharing sodas. Then there were the visitors who were most enthusiastic about play. They came with whistles, skipping ropes, balls, and toys. Coaching their hosts, they praised talent and joy. Children and adults laughed and played themselves hoarse.

Clarissa, new to the Children of Love Home, noticed how fellow residents adjusted for these weekend visitors. Farida wore her pink lacey dress and clung to visitors’ hands while showing them around. Collins rehashed his famous-politician accents, delighting in visitors’ cackles. Rosina’s singing went tremolo while leading welcome and thank you songs. Twins Rael and Joel acted younger than nine years old, following visitors everywhere. Clarissa around visitors was demure, stumbling through sentences whenever she was spoken to. She preferred wearing her baggiest clothes, to hide what she had stolen from the donations.

Love’s residents couldn’t hold onto the idea of Father Christmas, not when he appeared at each visit, skinny, or chubby, or with a cottony beard that fell off mid-conversation, or white, and then black. But whoever he was, they chased him around, singing, “Father Christmas! Father Christmas!” Some Father Christmases didn’t carry enough gifts for everyone. Clarissa understood that all visitors’ offers and requests were to be received with gratitude and enthusiasm, always!

On this visit, Clarissa had joined in applauding the “surprise” of roast beef, weeding the vegetable garden alongside the guests, and the impromptu dancing contest where she had known to perform in a style that wouldn’t get her in trouble with Mama Kemi, her house mother. Clarissa had envied her brothers and sisters who got assigned to show the visitors around, but this time she got her turn, too. She hadn’t enjoyed it. A woman in the group she’d been paired with sighed and applauded. “Lovely, Clarissa!” she said. “You are so clever!” she added, patting Clarissa’s shoulder. This woman asked about Clarissa’s real family. “Where do you come from?” She wanted details on Clarissa’s schooling, her grades, her dreams, and whether she had a relationship with Jesus. Clarissa on ordinary days didn’t ever call the guardians at Love Home Mummy and Daddy—they weren’t that to her—but for the visitors she did. Mummy Josina, Daddy Samson, and Mama Kemi were the only parents she knew, she said.

Clarissa stood among the rows of boys and girls, in front of their home’s signboard and the wall with a faded mural of boys and girls. She was among 22 of the 56 of Mummy and Daddy’s charges present that day. The majority had gone away for scheduled family visits. Three boys, John, Karisa, and Micah, had jumped over the fence and run away. The visitors, 15 men and women in lime green company T-shirts printed for this occasion, lined up behind the children. One of the men squatted in the front row among the youngest kids. The items they had brought—gunny sacks with used clothes, new toys, toiletries, books, and food—were piled in around the scene. Small items were unpacked and handed out for the photos. When the photographers said “smile,” the children waved bars of soap, packets of biscuits, exercise books, and two footballs. Clarissa waved her packet of sanitary towels.

In their minivan, the visitors discussed improving the home in the new year. Maybe they could set up a fundraising website? You know, do something more impactful. Or they could solicit a brand partner to repaint the walls? They considered revamping the dilapidated hall, one of them calculating the costs. They agreed it was a day well spent. Some dozed from exertion. It was the last week of work before their office shut down for Christmas break. They spoke about the children who had really tugged at their hearts. Like nervous and shy teen Clarissa. They hadn’t had a chance to visit the baby nursery; they’d prioritize it for the next trip.

As the visitors left, Clarissa along with other upper primary boys and girls stepped forward to carry the donated items to the store, where they’d be sorted and then sold. Out of one of the boxes, she snatched a pack of girls’ panties and placed it in her loose dungaree pocket. She looked around. Nobody had seen her. Leaving the store, Clarissa walked to the yellow house. The paint on its walls was long faded. It had been just nine months since she’d been assigned to live here with the other brothers and sisters. Things quieted down as Love’s residents scattered to their houses. Night security guards walked around the compound, passing the houses—yellow, green, brown, blue—on the way down to the three-story hostels where the older girls and boys lived. Children drew the curtains and switched on the lights, falling back into their regular Saturday evening routines. It would soon be time for supper. Anticlimactic rice and beans for most, like the slow worship songs at the end of raucous prayer, tongue speaking, and dancing. A return to order.

Though she was the oldest girl in the yellow house, Clarissa had little clout as she was two years behind her high school-going agemates who lived in the hostels. Mama Kemi was kind but picky. At the yellow house, if they overslept, or didn’t mop the bathroom floor to her liking, or if they didn’t wash and shine the cooking utensils as she preferred, she’d get worked up. As she wasn’t allowed to beat them, she shouted instructions and ordered the children to repeat tasks over and over. Clarissa preferred beatings. Couldn’t Mama Kemi just beat them, Clarissa thought. Mama Kemi wasn’t home yet. Clarissa’s sisters were already in the girls bedroom. Clarissa sought a place to hide the panties; night inspection loomed after visitors day.

Lutivini Majanja is a writer from Nairobi, Kenya. Her writing has been published in The Elephant, Popula, Obsidian, Best Microfiction, Wigleaf, New Orleans Review, Down River Road, Nipe Story podcast, and more. 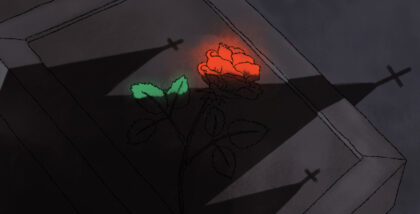 The prayers were unfinished, like she was, and what is sent unfinished to heaven—a life—becomes sacred in its mystery. 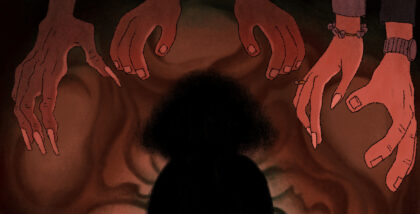 She was eager to see this child who wouldn’t bear the traces of anyone, perhaps not even of her. 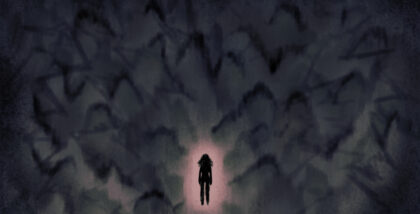 When the sun disappears, I shiver. Things howl and whisper. I remember that I’m alone. 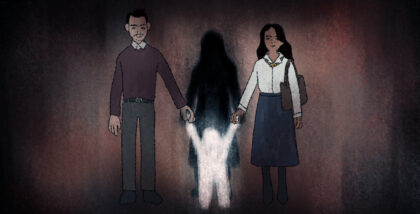 Mahum wasn’t the one who was pregnant, but her body seemed to think she was. 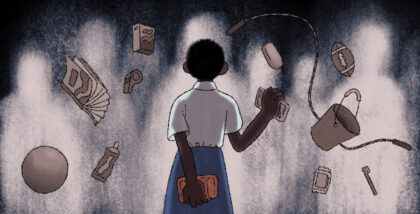 When the photographers said “smile,” the children waved bars of soap and packets of biscuits. 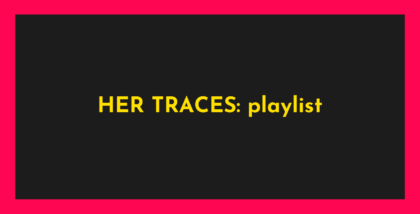 A Soundtrack To Issue 9

The fictional characters of Adi’s latest issue, HER TRACES, are attuned to careful listening.